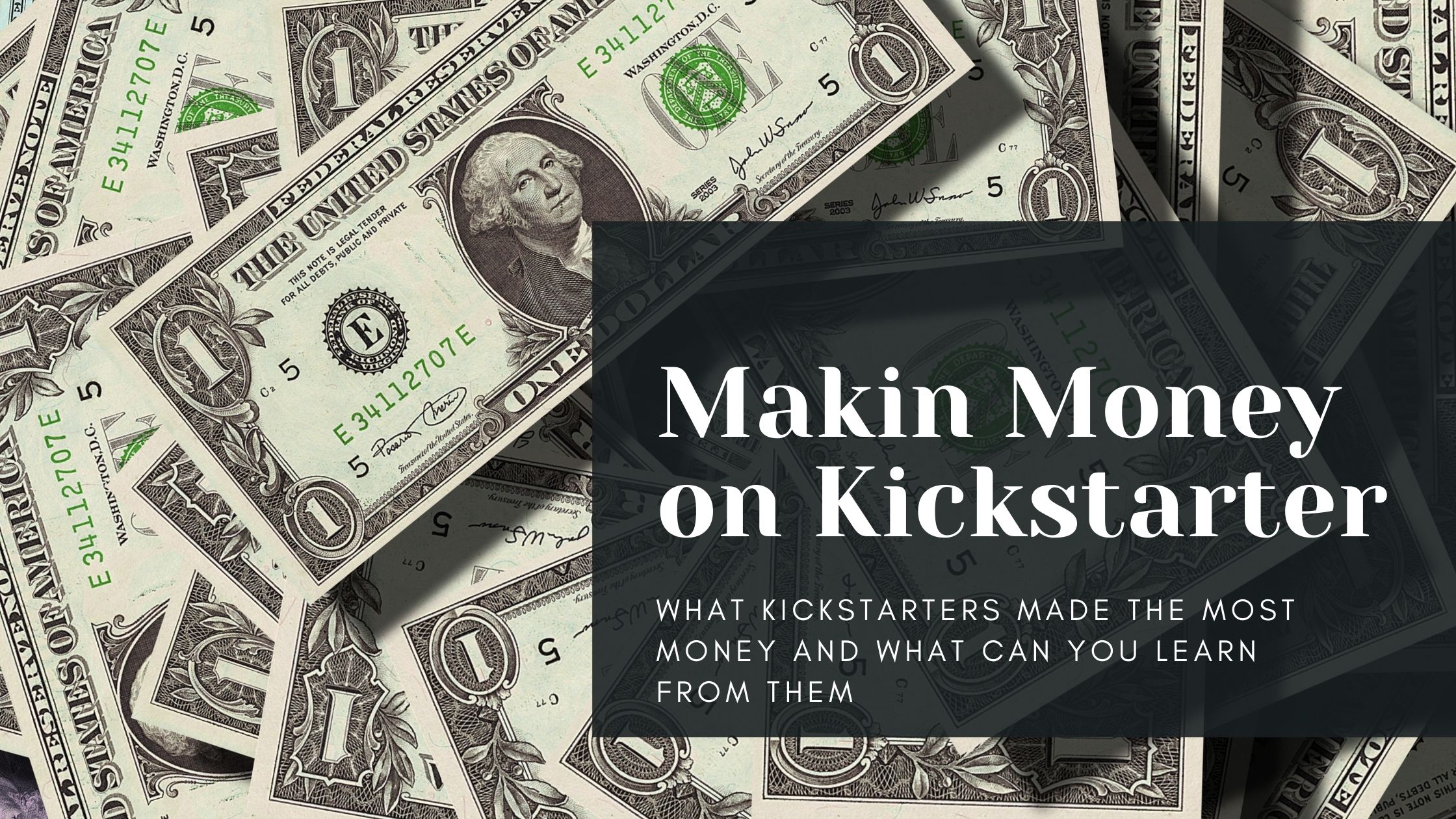 Thanks to Kickstarter, hundreds of new projects have been able to launch to market without the need for VC or angel investments. In fact, most Kickstarter success stories like the Travel Tripod, the Exploding Kittens, and many others have gone on to become successful eCommerce products.

Pebble Time as the Most Funded Kickstarter Project

In the history of Kickstarter projects, Pebble Time is the most funded project, raising $20 Million in one month.

It was backed by 78,463 people and broke records as the fastest project to raise $1 million in 49 minutes considering that their project campaign goal was a mere $100K.

Back in 2012, Pebble Time was a second-generation smartwatch that featured an e-paper screen with one-week battery life. It was cutting-edge technology with just a $179 price tag.

Sadly, it couldn’t compete long-term with Fitbit and Apple releasing their smartwatches in 2015. By December 2016, Pebble filed for insolvency, selling certain assets to Fitbit.

Pebble had a glorious start, only to end up losing to giants. But what it did leave behind was a legacy and a blueprint on how to build a solid community of supporters who to this date believe in Pebble’s design and technology.

The cooler built for the 21st century. It was a high-tech cooler with a built-in blender and tech features ahead of its time.

As much as this was a stellar Kickstarter success, it was also a huge failure post-campaign. Coolest Cooler was never able to deliver the coolers on time and closed operations, citing ‘trade war’ as the reason for failure.

Frosthaven, the sequel to Gloomhaven is one of the most successfully funded board games on Kickstarter. With 80K backers, the project was funded in just a few hours after the project went live. Frosthaven is expected to ship by 2022.

The EcoFlow Delta Pro is a portable home battery that attempts to provide multiple days’ worth of backup energy for homes.

This project is an example of the diversity you can find on Kickstarter. From board games to home solutions, you can launch any kind of product on the platform – and if it meets people’s needs, you can quickly get funded by the community.

Regardless of their post-campaign failure, these top Kickstarter success stories had a brilliant mix of marketing + promotional strategies that are fundamental in making a Kickstarter campaign successful.

We’ve analyzed each of these campaigns from the perspective of a crowdfunding marketing agency and we believe here are some key things they did right to achieve the success they did.

If you can follow any of these lessons, you can be very successful with your Kickstarter campaign.

1. Be Sure the Market Has a Need for Your Product

Frosthaven was a sequel to Gloomhaven, an already very successful game. Why did the founder Isaac Childres launch Frosthaven, given that he has an established game company?

His response is a key learning lesson:

“We are a successful brand at this point, but I’m still not at all sure about how many copies of this sequel that I should print. We sold over 200,000 copies of Gloomhaven. Should I print that many? If only 10,000 people want the game and I print 200,000, that’s a disaster.”

Even if you’re an established organization, you have to KNOW if your product is even needed.

If you’re a new entrant, you can get market validation by running surveys and product validation ads on social media. You can also understand public sentiment by discussing your project on Reddit & Twitter.

2. Working with a Marketing Team

No matter how awesome your product, it cannot get to the first page of Kickstarter projects unless you promote the heck out of it.

This means you need a full-fledged marketing team. Or, a crowdfunding marketing agency.

You need to have a budget of at least $15,000 to inject into marketing and promotional costs.

A quick cost breakdown of a basic crowdfunding project:

If you’re short on budget and cannot afford to hire a team or an agency, you can get freelance talents, however, you will need to give direction and do most of the homework.

3. Launching When the Time is Right

When it first launched in 2013, it failed to meet its $150,000 goal. The main reason is that November – December are the worst months for Kickstarter campaigns. With Thanksgiving, Christmas, and New Year, most people are generally out of budget.

Coolest Cooler founder Grepper decided to tweak the product and launch it in the summer! As Americans were gearing up for Independence Day and planning summer picnics, the Coolest Cooler was just what they needed! The campaign was so popular, that we’re still talking about it as one of the top-funded projects on Kickstarter ever, nearly 6 years later.

Here are some of the best times to launch on Kickstarter.

4. A Great Product is the First Success Factor of a Kickstarter Campaign

There’s a serious misconception that we as marketers HAVE to fix.

This is especially true if you’re trying to launch a campaign on Kickstarter.

The Pebble Time watch for instance, didn’t need any aggressive form of marketing.

In 2012, they had just the product people wanted. Simple yet exciting technology for nerds, kids, sports enthusiasts, literally anyone who wanted a ‘smart’ watch.

The product spoke for itself. With the right marketing strategy, it became legendary.

People often think it’s easy to succeed on Kickstarter if you just promote the heck out of your product.  What they don’t realize is that if your product is not something the audience wants or can relate to, your campaign won’t make it.

Before you spend tens of thousands on marketing & promotion, make sure your product is a good market fit and it’s something people want.

The top Kickstarter campaigns were those that had already worked on their social and digital footprints way before launch.

There are countless Kickstarter campaigns that have failed without spending adequate time in preparing for launch. You don’t just crowdfund. You have to prepare your business and your brand way in advance before starting a campaign.

The campaign itself will last only for 30 days of which only the first and the last week is where the action lies.

Some Facts to Help You Determine if You Should Consider Kickstarter

We recommend you do a deep dive into top Kickstarter projects of your category and note down key metrics such as funding goal and funding raised, number of backers, and what were some things they did right.

Here’s some additional information to help you decide if you should consider Kickstarter.

What Products Do Well on Kickstarter

Products that people can afford to buy to make their daily activities better do extremely well on Kickstarter. Items like a smart wallet, smartwatch, board games, tech gadgets, are very popular.

High-end projects that come with a hefty price (anything above $200) seldom do well on Kickstarter unless you have very strong product positioning with an impressive digital footprint – much like we did for iiRcade, a high-end arcade gaming box that sold at $399/piece.

What is the Most Popular Category on Kickstarter?

Games! Board games and video games are the most popular categories on Kickstarter with some 1.6 billion U.S. dollars pledged. Two of the most highly funded game projects were Frosthaven & Exploding Kittens. Design, technology, film & video, and music were the next most funded categories.

What is the Success Rate of Kickstarter

What Percentage of Kickstarter Campaigns Fail?

How much does the Average Kickstarter Make?

1 out of 1,250 project hits the $1 million mark on Kickstarter – but we’re talking about projects in the games, design, and tech categories.

Now, before you get uber excited, here’s a reality check:

There have been 453,585 projects launched since Kickstarter was founded in 2009.

The average amount you can raise on Kickstarter is $23K.

Making money on Kickstarter is possible. If you need to talk to an expert, feel free to reach out to us for a free consultation call!