Kickstarter or GoFundMe? Which Crowdfunding Platform Should You Choose to Crowdfund Your Project? 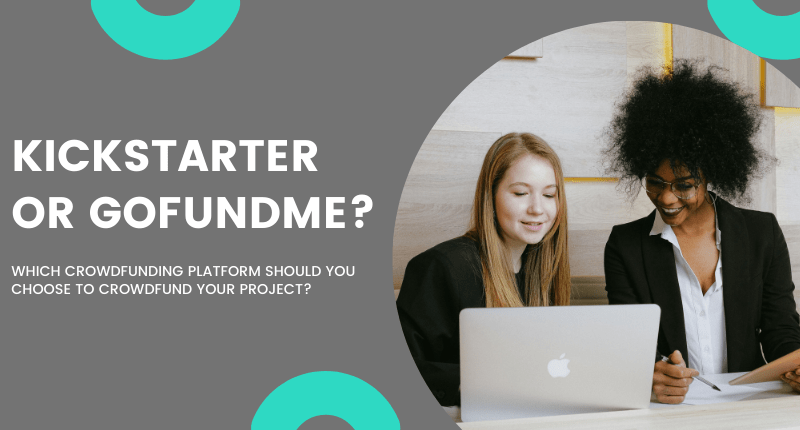 29 Dec Kickstarter or GoFundMe? Which Crowdfunding Platform Should You Choose to Crowdfund Your Project?

One of the most interesting things to come out in today’s knowledge age, modern crowdfunding has become a ubiquitous term. This trend has given creators and activists a means to accomplish their goals with the power of internet-enabled denizens.

There are many crowdsourcing platforms online, each with its own strengths and weaknesses. We reckon that you’re familiar with two of the most famous crowdfunding platforms – Kickstarter and GoFundMe. Do both of them do the same thing? The short answer is – yes and no.

Kickstarter is a crowdfunding platform that was designed for people who want to create creative products, for commercial purposes. In comparison, GoFundMe works on the principle of funding personal (and charitable) causes. These differences notwithstanding, there are some finer distinctions between the two platforms that you should be aware of.

Kickstarter and GoFundMe Services on Offer

Using the wonders of a globally connected populace as well as the power of social media, you can ask people to raise funds for your project. Both Kickstarter and GoFundMe take a percentage of the donated proceeds as fees. This is the only thing that is similar between the two competing platforms.

Let’s take a look at how Kickstarter works.

Kickstarter is geared towards funding creative projects. It is the only thing allowed there. All campaigns are screened before they go online. Basically, Kickstarter campaigns are projects that should have tangible deliverables. These creations are shared with backers upon the successful conclusion of your projects.

GoFundMe is based on charitable crowdfunding. Though the platform does allow raising money for businesses, it does so if part of the proceeds are going towards helping people and/or charitable organizations. This can be either in the form of medical expenses, aid, poverty alleviation initiatives, therapy fees, etc.

Are these crowdfunding platforms successful? Amidst many other crowdfunding sites, Kickstarter and GoFundMe have raised over $4 billion and 5 billion respectively!

Both platforms work by rewarding contributors, although Kickstarter makes it mandatory from the outset. With GoFundMe, gift-giving is optional.

How can your project qualify?

Kickstarter has these strict rules for crowdfunding campaigns:

In addition to all these rules, Kickstarter reserves the right to clear a crowdfunding campaign. This process takes as much as three days.

Things are not too strict with GoFundMe. Furthermore, they do not require any approval from the platform before they can be launched. However, if a campaigner indulges in any illegal activity, GoFundMe reserves the right to take down their project.

Both Kickstarter and GoFundMe have a straightforward application process. Campaigners can fill out details about yourself and the crowdfunding project, and submit it. Kickstarter takes some time to review your application. The platform estimates that about 80% of the projects they get are approved.

With GoFundMe, you need not wait. You can start your campaign immediately, provided you followed all their rules.

Another thing that works for Kickstarter is that they only get their fees once a project is successfully executed. This detail fosters transparency in its sales practices. GoFundMe is also transparent about their sales process, and they keep you apprised of your campaign every step of the way.

As for customer support, Kickstarter falls short. Their support system fails for most campaigners, as many have complained they can’t seem to get connected with Kickstarter reps in time. As for GoFundMe, it fares better in customer service with its 5-minute support guarantee. They claim to respond to any message via their contact form under 5 minutes.

Are Kickstarter and GoFundMe 100% Good?

Users have often complained about both platforms. Kickstarter has been criticized by both campaigners and backers. Campaigners point to its less-than-timely record of responding to queries, whereas backers point out how some fraudulent companies back out of its commitments at Kickstarter i.e. by sending defective rewards or not even sending anything at all.

For GoFundMe, some users claim that they faced difficulty in collecting funds for their causes because ‘the platform did not trust them for one reason or another.’ Public outcry forced GoFundMe to forego its earlier practice of collecting 5% of the proceeds as platform fee. The fee was scrapped when, according to reports, 5% of all donations for victims of one shooting incident, were being pocketed by GoFundMe.

Despite of these issues, crowdfunding is still a very new industry. Both Kickstarter and GoFundMe continue to improve their process of helping legitimate businesses and charitable causes get the money they need. The likelihood of more successful projects in recent years has only served to highlight that user feedback is taken seriously.

Go with Kickstarter if:

Opt for GoFundMe if:

While crowdfunding is not the be-all-end-all to raising money for projects, it is however quickly becoming a viable alternative for people who want to contribute to causes and projects they believe in. Let us harness the positive power of social media to help small businesses / personal causes with the tools and technology we have at our disposal. The choice is yours!

Want to know more about crowdfunding? Check out this detailed video!